Described as ‘bigger than going to the moon’, the monumental U.S. Exxon / Russian Rosneft deal is now sidelined by U.S. economic sanctions of Russia, even as the Arctic region continues to rapidly become ice free due to global warming.

National / global connections between oil / gas production and CO2 emissions and the international community’s growing demands to address climate change threats and disruption are being lost amid the oil / gas rush to the North. Rich resources call loudly and the presidents of the U.S. and Russia hear the call, even as the U.S. / Russian relationship is caught in legal and geopolitical crossfire.

The U.S. president claims he’s too intelligent to believe in the climate science as reported in the national / global assessment report… the risks are not visible on his radar screen. The Russian president is an enigma as 2019 approaches. Russian strategic energy agreements with China, OPEC, Saudi Arabia, Iran, Venezuela continue as a multi-front challenge to U.S. oil/gas interests in the Mideast, with new ‘fracking’ technologies throughout the U.S. and with production globally protected by an extended military presence. 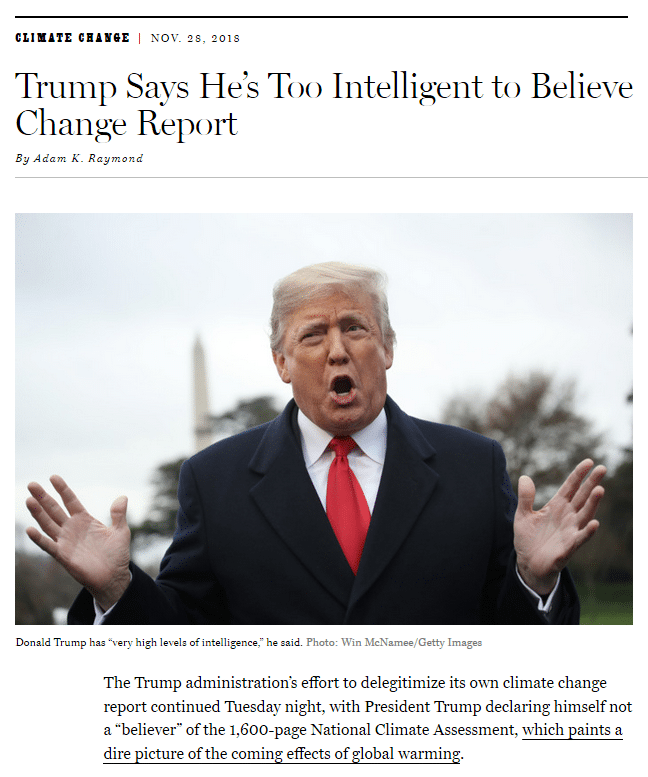 Current response to crisis is insufficient

Just over eight years ago, the U.S. president-to-be tweeted of how he perceived global warming/climate change — he called it a ‘Chinese hoax’:

“The concept of global warming was created by and for the Chinese in order to make U.S. manufacturing non-competitive.”

In 2014, Donald Trump added with sarcasm:

“It’s late in July and it is really cold outside in New York. Where the hell is GLOBAL WARMING??? We need some fast! It’s now CLIMATE CHANGE.”

He then equated weather with climate:

“Brutal and Extended Cold Blast could shatter ALL RECORDS – Whatever happened to Global Warming?”

The U.S. global climate change report of this past month (November 2018) concludes not only that the world’s temperature is rising and but also that the preponderance of evidence suggests human actions play a role in it. The report’s authors conclude that the changing climate “is transforming where and how we live and presents growing challenges to human health and quality of life, the economy, and the natural systems that support us. And that, unless we change our practices and policies, there will be “substantial damages to the US economy, environment, and human health and well-being over the coming decades.”

Unless we start making some major changes — and soon — we face the very real potential of crossing the point of no return when it comes to the planet’s warming, and the consequences that result from it.

The climate report is not a partisan document. It was… produced by 13 agencies within the Trump administration — the result of Congress, in the 1980s mandating that this sort of report be submitted every four years as a sort of reference point for lawmakers and legislators.