At the US Presidential Candidates Debate

“Four hours of air-time over two nights and the first climate question arrives about 90 minutes into the Democratic party presidential debate on both nights. The combined time spent on climate both nights amounted to 15 minutes.”

Time to Snap to It 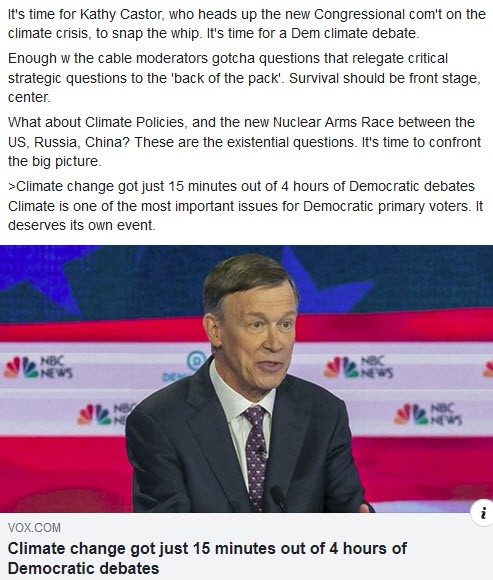 Night One of the Presidential Debate / Seven Minutes in Miami

“Tonight’s debate made it crystal clear that the media and the political establishment are out of touch with our generation,” said Varshini Prakash, executive director of the Sunrise Movement. “Our survival is worth more time than vague, irrelevant, and trivial questions posed 80 minutes into the debate to a few minor candidates.”

Via The New Republic

GreenPolicy360: In 2016, during all the US presidential debates, a climate policy question was asked, what, once? Tonight (June 26th) the US Democratic Party starts their presidential campaign debate, in Miami, even as the current US pres denies the big picture, the climate/global/atmospheric threat, the existential challenges, the national/state and local #ClimateCrisis impacts.

For decades now the GreenPolicy team has warned of the gathering crisis and we have urged a New Vision, a strategic vision with ”New Definitions of National and Global Security”. The time is now for the Democratic Party to step up and face the great challenge of our generation — climate disruption, climate crisis.

In Florida, the consequences of sea level rise are vivid and VERY real.

Globally, this is an existantial crisis, climate disruption, that is, atmospheric disruption, what GreenPolicy360 calls the disruption of the “thin blue layer”, earth’s life protecting atmosphere.

Speaking of climate disruption, global security and protection/preservation of the atmosphere, watch this scientist talk of the clear and present dangers of nuclear war. We are “one mistake away” from nuclear war initiated by any of the nuclear weapons countries (the U.S., Russia, China, India, Pakistan, Israel, France, the U.K., North Korea) leading to regional impacts spreading to global winter and collapse of civilization.

We need concerted action now to protect our common security and prevent the fast escalating threats to life as we know it.

It is time for a DNC decision, it is time for the Democratic party leadership, especially the chair of the new Climate Crisis committee, Kathy Castor of Florida, to head up the charge — It’s time for new vision, a vision that looks out at the security horizon and says Debate Climate Solutions.

Message to the DNC (Tom Perez we’re talking to you). It’s time to announce that one of the remaining Democratic party debates will focus on Climate Policy, Energy Policy, jobs and the Green New Deal, the ‘Big Picture’ — National Security and Global Security, today and tomorrow. This is our generation’s responsibility and obligation. The nation, the voters, the youth and the citizens, the planet citizens of the world are looking for action. 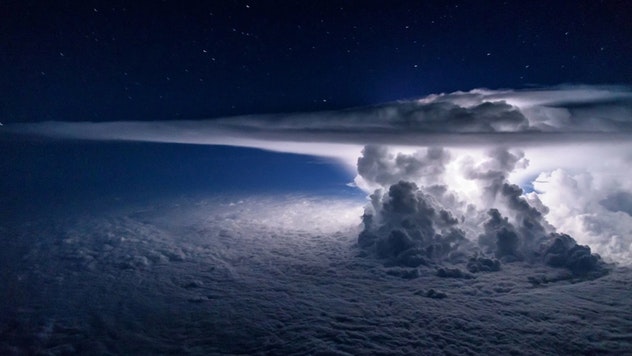