The nuclear question, the crisis, revolves around “CVID”. You ask, CVID? We answer, Complete, Verifiable and Irreversible Dismantlement (or Denuclearization?). Then we add calls for “complete nuclearization” on the Korean peninsula. Then we add — when, where, how, why. The world is asking for nuclear deescalation and not just on the Korean peninsula

Update: Meeting Seemingly Back On 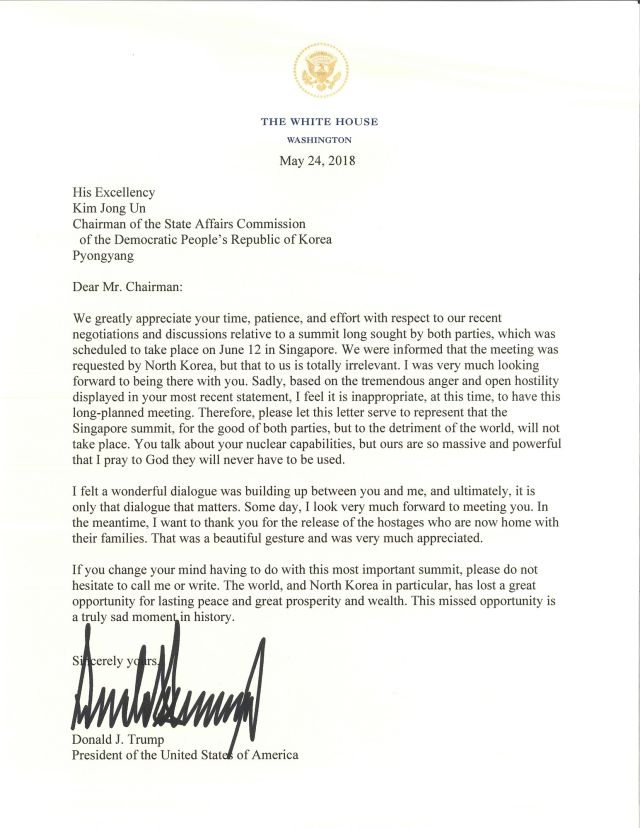 We greatly appreciate your time, patience, and effort with respect to our recent negotiations and discussions relative to a summit long sought by both parties, which was scheduled to take place on June 12 in Singapore. We were informed that the meeting was requested by North Korea but to us that is totally irrelevant. I was very much looking forward to being there with you. Sadly, based on the tremendous anger and open hostility displayed in your most recent statement, I feel it is inappropriate, at this time, to have this long-planned meeting. Therefore, please let this letter serve to represent that the Singapore summit, for the good of both parties, but to the detriment of the world, will not take place. You talk about your nuclear capabilities, but ours are so massive and powerful that I pray to God they will never have to be used.

I felt a wonderful dialogue was building up between you and me, and ultimately, it is only the dialogue that matters. Some day, I look very much forward to meeting you. In the meantime, I want to thank you for the release of the hostages who are now home with their families. That was a beautiful gesture and was very much appreciated.

If you change your mind having to do with this most important summit, please do not hesitate to call me or write. The world, and North Korea in particular, has lost a great opportunity for lasting peace and great prosperity and wealth. This missed opportunity is a truly sad moment in history.

President of the United States of America

For North Korea or for the Korean Peninsula 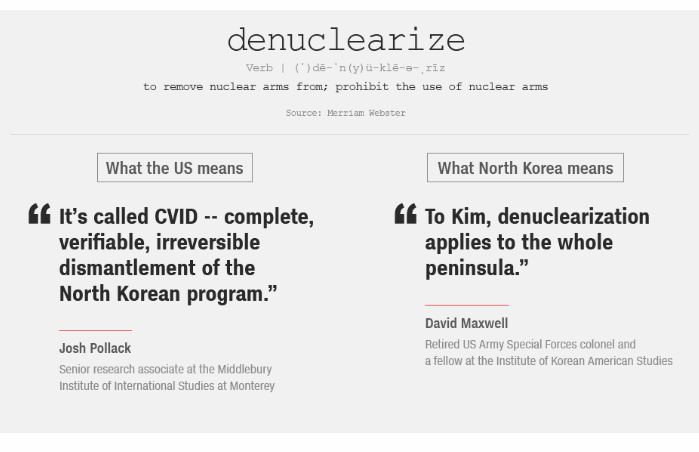 Denuclearization on the Korean Peninsula

One Goal, Different Interpretations — The Diplomat

Minister of Foreign Affairs Kang Kyung-wha and U.S. Secretary of State Mike Pompeo reaffirmed on May 11 that the complete, verifiable and irreversible denuclearization (CVID) of the Korean Peninsula is their common goal.

Minister Kang said in a press conference after a meeting with Pompeo in Washington that, “We reaffirmed that our goal is to achieve the CVID on the Korean Peninsula. The meeting between President Moon Jae-in and U.S. President Donald Trump on May 22 will be instrumental in preparing for a successful U.S.-North Korea summit.”

“The close communication and trust between Presidents Trump and President Moon have been the driving force that has brought us to this point of breakthrough for the denuclearization and peace on the Korean Peninsula. We very much hope to see further steps, more concrete steps towards denuclearization, being produced at the U.S.-North Korea summit. ” 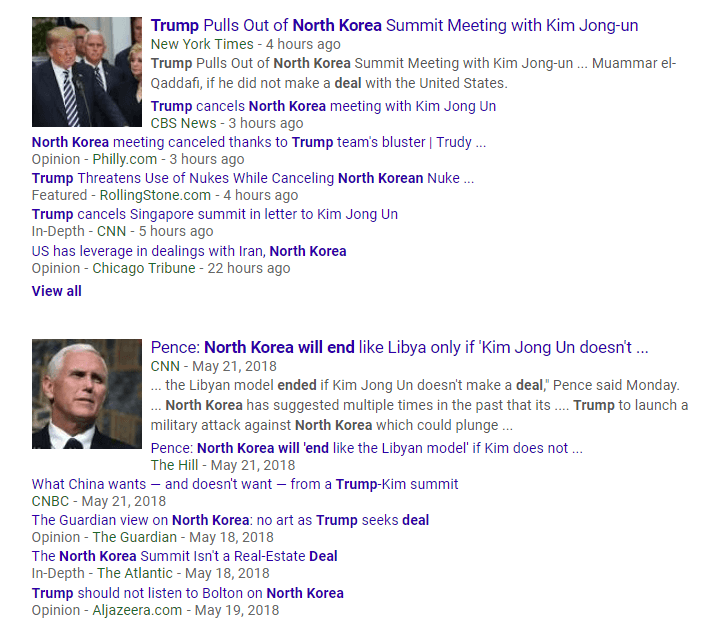