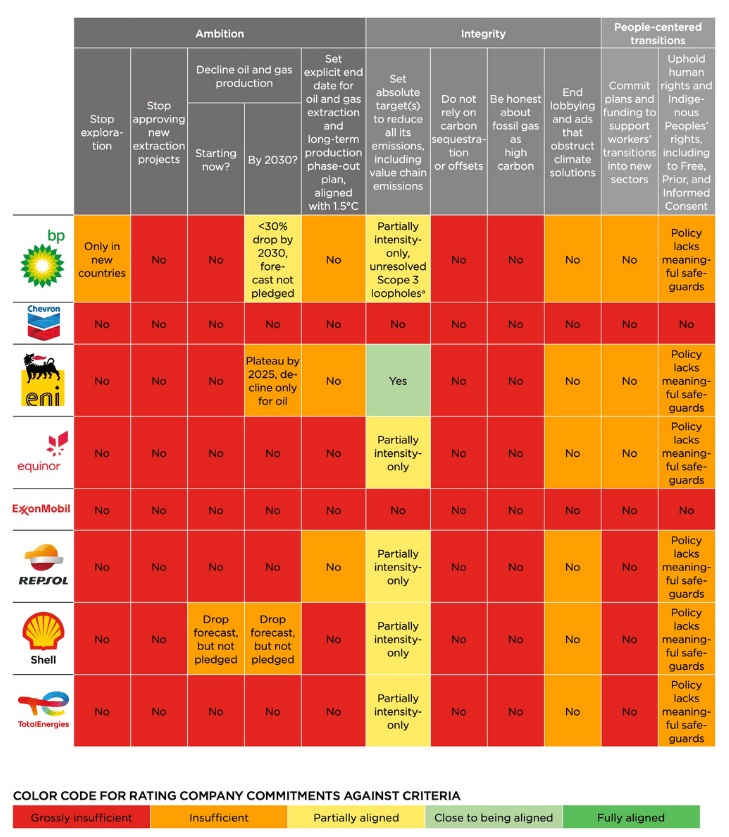 Then he added: “It doesn’t mean we have to kiss hydrocarbons goodbye. In fact, we can’t. But it does mean that we have to make more intelligent choices.”

Today, however, Shell and other oil companies are under fire from those who don’t believe industry leaders are making intelligent choices. Dissident shareholders sought to use annual meetings to press their cases this week. And at Shell’s annual meeting in London on Tuesday, dozens of climate activists wore “Christian Climate Action” T-shirts and rhythmically chanted “we will, we will stop you,” forcing the company’s chairman to halt the proceedings for over an hour.

At the heart of the matter is the disagreement over the purpose of big oil and gas companies. Should they do further exploration to meet demand for their products, especially from the world’s poorer nations? Or should they switch to building renewable energy projects while winding down their traditional businesses to meet climate change targets?

Meanwhile HSBC’s global head of ‘responsible investments’ gives a speech, gets loud reaction from multiple quarters, is suspended from his position

Why Worry About Climate Change… What’s the Big Deal?

Last week, the global head of responsible investments for HSBC Asset Management, Stuart Kirk, made a provocative presentation titled “Why investors need not worry about climate risk” at a Financial Times event in London.

Describing climate risk as a problem in the far-off future, Mr. Kirk said, “Climate change is not a financial risk that we need to worry about,” adding, “Who cares if Miami is six meters underwater in 100 years?”

“What bothers me about this one [climate change] is the amount of work here people make me do … the amount of regulation coming down the pipes, the number of people in my team and at HBSC dealing with the financial risk from climate change.”

“I don’t doubt the science.”

“To bend the arc of fossil fuels down and the arrow of renewables up, we need to follow the activists who are imploring us to elect leaders that will enact improved regulation.”

“For most companies with stranded assets, and even for tech, their valuation does not take into effect anything after 20 years.” The “average loan length [at HSBC] is six years,” he continued. “What happens in year seven is irrelevant to our loan book.”

(Ed: Noting that, according to the New York Stock Exchange, the average holding period of shares is measured in months, down from a peak of eight years in the late 1950s. Clearly, investors’ time horizons don’t match planetary boundaries (nor do their discount rates). The mid- and long-term horizon is critical to the next generation, but not to today’s investors.)

From Pensions & Investments | Re: ESG (Environmental, Social and Governance movement)